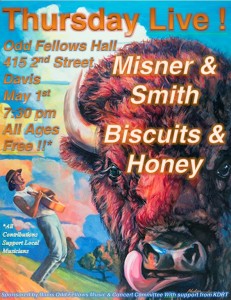 Misner & Smith’s music is a search for meaning. Their songs yearn for connection, ache for understanding, relish in mystery, and rejoice in creation. In a world that often feels to be crumbling down around us, they dig deep, and find hope in the simple things, and in the beauty that surrounds us all. With their brand new release, Seven Hour Storm, the duo have created an album of vivid, poetic songwriting, filled with some of the finest harmony singing around. “The album is full of riches … [and] brings to mind Gillian Welch and David Rawlings’ harmonies”, says American Songwriter Magazine.

Their sound has the same timeless quality as some of the classic albums in folk and rock, and each song is a story, a journey, a place, a time, and an experience in itself. There is nothing general in the songwriting, nothing vague. The Detroit Metro Times writes “Misner & Smith’s Seven Hour Storm is honest and authentic, yet still contemporary,”

The imagery is sharp, and the lyrics plumb the depths of emotions with an ease and honesty that is personal and at the same time universal. PopMatters declares,”Simon & Garfunkel comparisons are in order.” and listening to the duo’s captivating version of Simon’s “America” those musical influences are easy to hear. Celebrating 10 years together this year they are truly seasoned live performers and their energetic live shows are unforgettably beautiful.

They have toured all over the U.S. and been across the pond with two tours over in the UK. With vivid, story-filled songwriting and an astounding vocal blend their unique sound has earned them a growing fan base everywhere they tour and in 2007, their song “Madeline (Paradise Cracked)” won the West Coast Songwriters Association’s Song of the Year.

Biscuits and Honey is a Davis-based folk bluegrass acoustic trio. Dianna Craig (guitar and vocals) has performed with Frankie and the Fabletones, Voice of the Wood and Akimbo!, Kurt Roggli (guitar and vocals) was a member of Akimbo!, Me & Him, and Waiting for Bruce. Ron Cowden (bass and vocals) was a member of many Davis bands including Elvis and the Emen, Waiting for Bruce, and Zorelli. Biscuits and Honey is known for their vocal harmonies.

Biscuits and Honey will also be playing this Thursday, April 24 at Sundstrom Hill Winery from 5p.m. to 7p.m. 2744 Del Rio Place in Davis.

Thank you for your continuing support of Thursday Live! Spread the word!