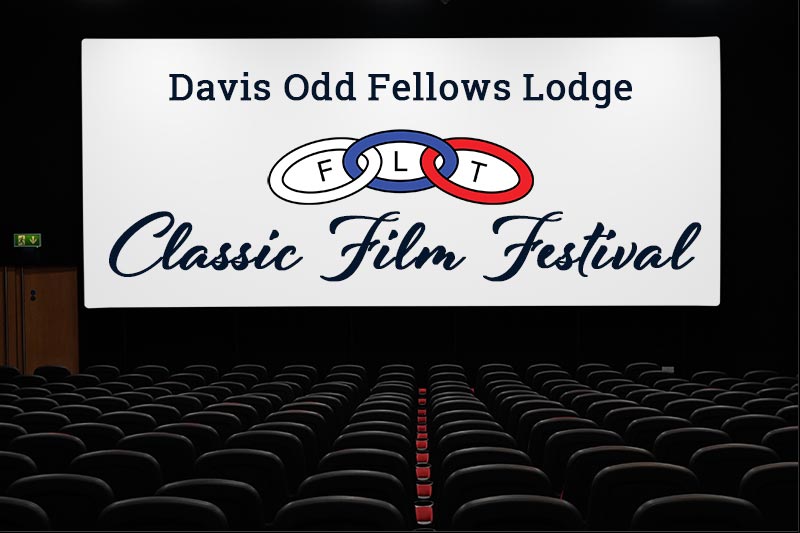 ​In 2014 our Odd Fellows Lodge launched the Davis Odd Fellows Classic Film Festival, offering classics from the Golden Age of Hollywood, twice each year. Due to the pandemic, we had a one-year hiatus.

But now, we’re BACK!

This will be our 14th Classic Film Festival and we will be showing three films on three Sundays, in the Upper Hall on our big movie screen. The bar will be open with mixed drinks, wine and beer for sale, and we will provide free popcorn. As always, noted film critic and movie reviewer Derrick Bang will be present to give us the backstory of the films, the actors, and the directors.

The genre for this Fall Classic Film Festival is “Light-Hearted Larceny” (essentially comedy heist films). And we can all use some light-hearted films these days. The chosen films are “The Pink Panther”, “Charade”, and “The Fortune Cookie.” They are true classics with well-loved performers including Peter Sellars, Claudia Cardinale, Cary Grant, Audrey Hepburn, Jack Lemmon, Walter Matthau, and many other stars of the era.

We are doing something a bit different this time. We are showing three films per the schedule which follows, but will also have a special evening on September 12. Derrick has produced two books which will be featured on September 12 with an evening of film clips, fun, surprises and prizes. There will also be a book signing.

Here is the schedule for the Odd Fellows Classic Film Festival so that you can mark your calendars:

And, as written by Derrick Bang, here’s some background on the three chosen films:

The Pink Panther (1963) — The first (and arguably) best in the series, with David Niven starring as cultured playboy Sir Charles by day, and the larcenous “Phantom” by night. His current target: the fabled Pink Panther gem worn by a princess (Claudia Cardinale) who is visiting a posh ski resort. Inspector Clouseau (Peter Sellers), determined to catch the Phantom, shows up with his wife (Capucine), who’s having an affair with Sir Charles; his life is complicated further by the arrival of his brash American nephew (Robert Wagner). Lots of fun in a much lighter comedic vein than the later, pratfall-laden and landscape-shattering entries. Another great score by Mancini, who earned an Oscar nod for it.

Charade (1963) — Merely one of the sharpest-written films ever — one of my all-time favorites — and a delectable romantic pairing of Audrey Hepburn and Cary Grant, along with one of those early dream supporting casts of folks who went on to become famous in their own right. The story opens as Hepburn’s husband is found brutally murdered, while she’s on holiday; she returns to her flat to discover that he had liquidated and sold all of their assets, leaving her with absolutely nothing. Worse yet, three rather nasty types — James Coburn, George Kennedy and Ned Glass — are convinced that she has the money they killed her husband to get. CIA administrator Walter Matthau tries to help; charming American Cary Grant keeps popping up at odd moments. Fantastic score by Henry Mancini, who earned an Oscar nod for Best Song.