Save the Date – Oddtoberfest 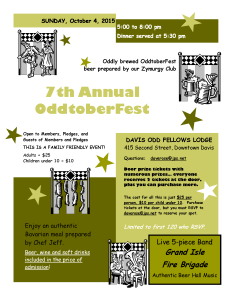 On October 12, 1810, a celebration was held to honor the marriage of Crown Prince Ludwig of the Kingdom of Bavaria to Princess Therese of Saxony-Hildburghausen. The citizens of Munch were invited to attend the festivities, which involved a feast and horse races which all took place on the fields in front of the city gates. Those fields, which were renamed Theresienwiese or “Therese’s fields” to honor the crown princess, were home to the first party which they called “Oktoberfest”. It seems that everyone enjoyed the celebration so much that officials decided to hold the race again every subsequent year in conjunction with the state agricultural show. Although the horse racing went by the wayside, the more modern Oktoberfest party is still held on the original site to this day, and this year will celebrate its 205th anniversary.

Well, the Davis Odd Fellows are not far behind. Sixty years after the first Oktoberfest in Munich, the Davis Lodge (then called Yolo Lodge) received its charter (it happened in 1870). And this year, we will celebrate the 7th anniversary of our own Davis “OddtoberFest”. And YOU are invited. The Fest this year will take place at the Lodge on Sunday, October 4, from 5 to 7 p.m. This is a family-friendly event, and you are invited to bring family, friends and relatives. Of course, our own Zymurgy Committee will be brewing specialty beers for this occasion.

There will be a live German band this year, authentic Bavarian food, and lots of amazing and fun door prizes. More information will follow, but for now, please mark your calendars. The OddtoberFest is just 8 weeks away.