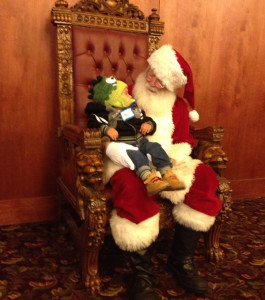 Thank you all for a successful Breakfast with Santa 2015.

The Davis Odd Fellows Lodge has just completed another successful Breakfast with Santa (BWS). Tickets – 360 of them – sold out within two weeks. This was our TENTH year organizing, sponsoring and hosting this event at the Lodge. As co-chair of the event, I wanted to say THANK YOU to all the volunteers and sponsors who made this a great success. Over 40 Odd Fellows volunteered and assisted in various aspects of BWS.

I wish to thank the 360 children and adults who attended BWS. Seems like everyone had a great time. The children got to spend time with and got their pictures taken with Santa, everyone had a wonderful breakfast, and each child received a goodie bag with treats, small gifts and surprises. I send a special thank you to Doug Hatton – a member of the Odd Fellows Lodge and the best Santa ever. Chef Jeff Oblinger and his crew of Odd Fellows who did a marvelous job in the kitchen, feeding 360 guests in three seatings. Sharla Cheney served as the volunteer coordinator, and Debbie Friend was in charge of decorations.

The Odd Fellows also raised over $12,000 from BWS this year from ticket sales and sponsorships – an all-time record. These funds will be used to benefit foster children and former foster children in Yolo County.

Thank you to Common Grounds and Avid Reader who sold our tickets. Thank you to the Davis Enterprise who helped us immensely with their articles about the event. Thank you to Ernesto Sandoval who takes care of the photography of children with Santa. Thank you to “What Four”, a mixed barbershop quartet who entertained our guests with Christmas Carols.

Mark your calendars for the Eleventh Annual Breakfast with Santa which will be held on Saturday, December 10, 2016.