Rosenberg Promoted to Rank of Colonel 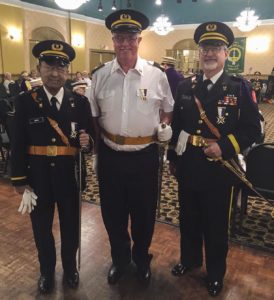 Dave Rosenberg was promoted to the rank of Colonel and elected to the position of Commander, First Regiment, Patriarchs Militant, Jurisdiction of California. The PM is the “Degree of Universal Justice” and is the highest degree in Odd Fellowship.

Rosenberg, Sen and Corcoran received their commissions on October 19.