Odd Fellowship is a Family Affair 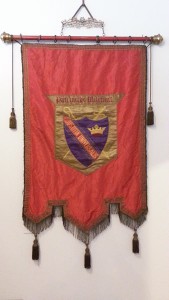 “I believe that people who have the power to help others, also have the obligation to do so.”

These are profound words. But who said them? Was it Thomas Jefferson? Teddy Roosevelt? Bobby Kennedy? Actually, it was none of the above. These words were spoken by Graham Fullerton, a 17-year-old high school student from Davis.

But there’s more, of course. Graham also happens to be an initiated member of the Davis Odd Fellows Lodge #169 who holds all three degrees in the Lodge, a member of Davis Encampment #21 holding all three Encampment degrees, and a member of the newly-formed Canton Davis #7, a Chevalier holding the Patriarchs Militant degree, the highest degree in Odd Fellowship. What makes this particularly significant is that Graham has only recently turned 17 years of age. According to the Adjutant of the Military Department, Graham is the youngest member of the Order in California holding the PM degree.

Graham comes from a family deeply involved in Odd Fellowship. His mother, Alekka Fullerton, is an Odd Fellow, a Rebekah, a member of the Encampment, and a Chevalier in the Patriarchs Militant. His father, Michael, is also an Odd Fellow, member of the Encampment and a Chevalier. Older sister Elsie, 20, is a Rebekah. And younger sister Annie, 14, is looking forward to joining the Rebekah Lodge and the Odd Fellows Lodge in Davis when she turns 16. Recently, Alekka, her mother, and Annie, traveled to Kansas to visit the gravesite of Alekka’s great grandmother, Mary Maude Stewart, who was a Rebekah. Odd Fellowship is part of the history of the Fullerton family.

Asked about his experience in the Order, Graham was quick to comment: “I’m pretty excited and happy about it, and I’m ready to become even more active.” Graham emphasized his interest in helping others. “I joined because of the opportunity to do some good in the community.” Graham found that the Davis Lodge and the Davis Encampment, in particular, were dedicated to providing active community support.

“My parents talked about joining the Lodge and I’m glad we did,” said Graham. “I have enjoyed the chance to meet people who share my values. Plus the initiation was kind of cool.”

In actuality, said Alekka, it was Graham that prompted Michael and her to join the Lodge. Because Graham wanted an outlet to help others, the family as a whole got involved in Odd Fellowship. “Graham’s interest was what motivated us,” said Alekka.
Although relatively new members, the Fullerton family is now deeply involved. Graham helps on the Senior Project committee – assisting frail seniors with help around their homes. Alekka is Secretary of the Odd Fellows Lodge and Clerk of the Canton. Michael is Guard in the Canton.

Graham’s outside interests include swimming and water polo. In fact, Graham is on the U.S. Youth National Water Polo Team. He plays center and is currently making a transition to the center defender position.
“I encouraged Alekka to join the Odd Fellows Lodge,” said long-time member Dave Rosenberg, “and I got even more than I bargained for. I was delighted to get the entire family interested. This, I believe, is the future of Odd Fellowship. It has to be a family-friendly place. And in Davis, we’re very proud of the Fullerton Family.”