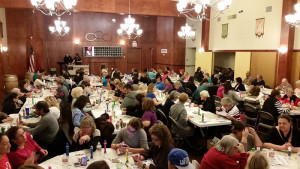 Team Davis is an all volunteer non-profit organization established to help enrich the lives of children and adults with developmental, cognitive and/or physical disabilities living in or close to Davis, California. Team Davis sponsors athletic, social, cultural and recreational activities that help build physical skills, a sense of camaraderie, and a more fully integrated connection with the Davis community for our participants and their families and support staff. We serve as the Davis area’s Special Olympics team.

Team Davis is one of the many community organizations that Davis Odd Fellows Bingo will be supporting in 2015.  A complete calendar of charity partners can be found on the DavisBingo.com website.

Bingo games are run for the public every second Sunday of the year (except for the second Sunday in May which is Mother’s Day) and all proceeds are provided to a community beneficiary every month.

The next Bingo game is scheduled for Sunday, February 8, 2015, with doors opening at 12, and Bingo play beginning at 1 p.m. The public is cordially invited. The February 2015 beneficiary is Yolo Arts.

Davis Odd Fellows Lodge has been running Bingo for the community, once each month on the second Sunday, for over seven years.  This is real Bingo, with cash prizes, authorized by state law and approved by the city council.  Every month the Davis Odd Fellows designate a beneficiary to receive proceeds from Bingo (after expenses and payouts to winners).  Over $60,000 has been donated to community beneficiaries in those years.