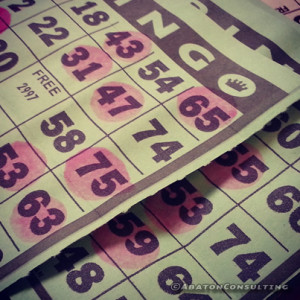 The games are open to the general public, and members and pledges are cordially invited to attend.

The Odd Fellows Lodge Bingo Committee operates Bingo every month on the Second Sunday, and proceeds from Bingo are provided to a Yolo County beneficiary each month, as well.  In January the beneficiary is the Madrigals.

Doors open at 12 noon, and the first game begins at 1 p.m.  Typically, 14 or 15 games are played and Bingo usually ends around 4 p.m.   Players can purchase Bingo packets for $20 which supplies sufficient cards to play all games during the afternoon.  There are also economy packets available at $12 each.  Cash is paid to the winners at the conclusion of each game – up to $250 cash for the winner of the final game – blackout Bingo.  In addition to the Bingo games, players can purchase instant win pull-tabs throughout the afternoon, and there are door prizes that are provided by drawings, at no extra charge.  The Odd Fellows also operate a snack bar during the Bingo games, offering hot dogs, nachos, cold drinks, candy and other snacks.   Coffee is provided free of charge.  On Sunday there are no parking restrictions and parking is free and plentiful.

The Davis Odd Fellows Lodge has operated monthly Bingo on the second Sunday of every month for the community for the last seven years, providing all net proceeds to a designated beneficiary each month.  Approximately $7,000 to $8,000 is provided each year to the beneficiaries which have included many community and charitable groups.   It is estimated that Davis Odd Fellows Bingo has provided some $50,000 to various community groups in Yolo County since its inception in 2006.