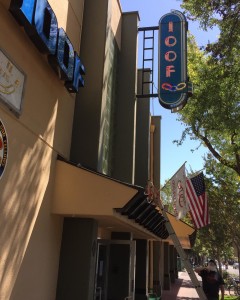 One of our Lodge members, Debbie Friend, saw an announcement on the Etsy website about this IOOF sign for sale. Debbie mentioned it to Dave Rosenberg, President of the Davis Odd Fellow-Rebekah Hall Board Association, and Dave followed up with support from the other members of the Hall Board – Dave Reed, Lea Rosenberg, Bob Bockwinkel, Diana Schmiegel, Joyce Trujillo – and Lodge Operations Manager Dody Black and her staff. He sent some e-mails and made a few phone calls and found out that the sign was in the possession of an antique dealer across the country, in New Jersey. It had been lying on its side for years, ignored and forgotten, in a warehouse. The sign itself is actually an antique that was constructed in the 1950’s and came from a defunct Lodge in Philadelphia. This information struck a chord with Rosenberg because the current Lodge Hall of the Davis Odd Fellows was constructed in the 1950’s. It seemed inevitable that the sign should come to California and be given renewed “life” as a part of the Davis Lodge.

After some negotiation over price and shipping, the deal was struck to purchase this sign and ship it straight across North America – from New Jersey to California. The cost of the sign, shipping, and installation was substantial, and was paid for by contributions from the Hall Board Association, the Davis Odd Fellows Lodge, the Davis Rebekah Lodge, the Davis Odd Fellows Music Committee, and Rosenberg himself. It took well over a week to crate and ship the sign. The sign is very heavy metal, ten feet long, and is bedecked with neon in red, white and blue – Odd Fellows colors. Once in Davis, it took six people to lift the sign, carry it, and store it in the conference room. Rosenberg made arrangements with a sign installation company, Ellis and Ellis out of Sacramento, to do the engineering and installation. But first, Rosenberg worked with the City of Davis – with great assistance from Mayor Dan Wolk and building and planning officials – to obtain all the permits necessary to move forward. The final permits were obtained by Ellis and Ellis, and the sign was installed on June 11, 2015 – reincarnated after years of somnolence. 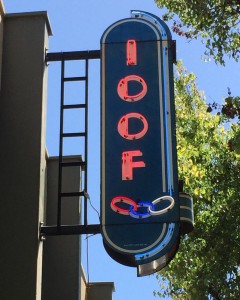 The new IOOF sign will be a welcome addition to Downtown Davis where the only other neon sign on Second Street is the old Varsity Theater sign.

A “lighting ceremony” is planned for Tuesday, June 23, starting at 8:30 p.m. in front of the Davis Lodge. Refreshments will be provided, and the new/old IOOF sign will be officially illuminated at 9:00 p.m. The public is cordially invited.