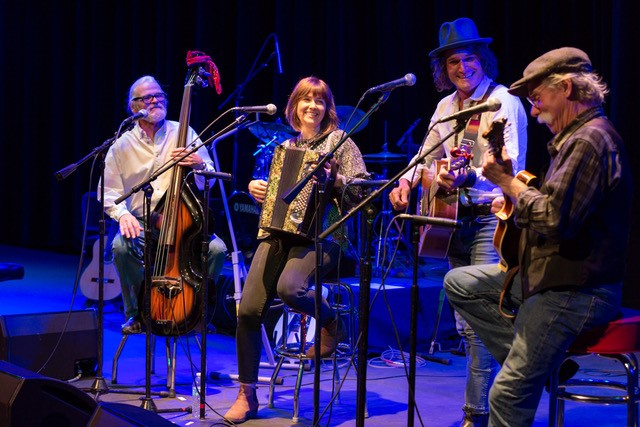 The Mendocino Quartet, a multi-generational folk/Americana band whose musicians include a former member of the Byrds and the longtime bass player for Van Morrison, will perform in concert 7:30 p.m. Saturday, Oct. 13, 2018, in the Odd Fellows Hall, 415 2nd St. in downtown Davis.

Tickets cost $20 (plus any surcharges) and are available at Armadillo Music, 207 F St. in Davis, or online at mendocinoquartet.eventbrite.com. The doors will open at 7. Tickets will also be sold at the door unless they sell out in advance.

Each writes songs, sings and plays guitar, among other instruments. Each has recorded and performed solo and with other musicians, ranging from Michael Jackson collaborator Bill Bottrell (Bates) to Foxglove (Moreland), Morrison and Jesse Colin Young (Hayes), and the Byrds and Flying Burrito Brothers (Parsons).

As a duo, Hayes & Parsons played a sold-out concert at the Odd Fellows in September 2016. Moreland has also performed in Davis several times. Last year the Mendocino Quartet, which takes their name from their home county on California’s North Coast, released their first CD, Way Out There.

The show is being produced by the Odd Fellows of Davis, local house concert host Bill Wagman, and Bill Buchanan of KDRT. Any profits will go to the Odd Fellows fund that pays for the free Thursday Live Night concert series during the year.

Read more about the Mendocino Quartet at http://www.musicofmendocino.com/styled/index.html