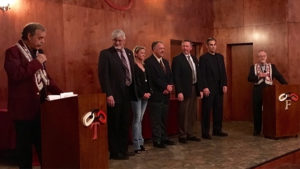 Over 70 members of the Davis Lodge, plus applicants and friends, attended the Installation Ceremony, and enjoyed a dinner of polenta pesto and bacon-wrapped chicken, rice and seasonal vegetables prepared by Lodge Catering. The Installation Ceremony dinner and entertainment was coordinated by 2016 Noble Grand Jean-Paul Montreuil and Roberta Savage.