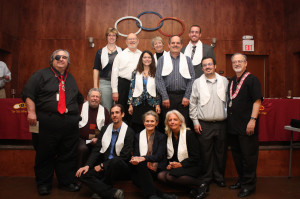 Before joining the Lodge, applicants must go through a 6-month “Pledge” period where they attend events at the Lodge, meet and interview members, and get active on one of the Lodge’s 25 committees.

The new 11 members range in age from 24 to 77. The addition of these 11 new Odd Fellows brings the membership of the Davis Lodge to 220, almost equally made up of men and women. The Davis Lodge (then known as the Yolo Lodge) was chartered in 1870, and has been a fixture in Davis and Yolo County since that time. The Lodge moved from a Lodge Hall on Ge Street to its present location at 415 Second Street, Downtown Davis, in 1955. The Davis Lodge engages in numerous social and good fellowship activities for its members (such as hiking, dances, wine tasting, beer making, and social hours) and numerous community activities for the town (such as Breakfast with the Bunny, a Taste of Davis, Breakfast with Santa, helping seniors in their homes, tree planting, and the like).