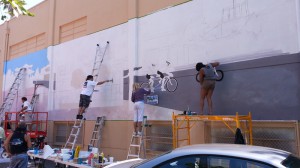 You may have noticed a new public mural going up on the west wall of the Davis Odd Fellows Lodge, 415 Second Street. How could you miss it? The mural is the largest public art piece in Downtown Davis. The mural encompasses three full panels on that wall, and is very visible from the sidewalk and Second Street.

The artists include Bill Maul, Myron Stephens, Kerry Rowland-Avrech, John Natsoulas, and possibly others from the Davis Mural Team. This mural is four times larger than any of the murals done by the Davis Mural Team during the summer of 2012. The mural is funded by a donation from Judge Dave Rosenberg. It will depict a street scene in Davis in a clever juxtaposition of the historic Old Davis arch, the Davis Farmer’s Market pavilion in Central Park, and quintessential bicyclists. The theme of the mural was selected by the Davis Odd Fellows-Rebekahs Hall Board Association and Dody Black, Operations Manager Lodge Hall. The Old Davis Arch guarded the entrance to G Street for many years, and then was demolished. A re-creation of the Old Davis Arch was painted on the side of the Old Aggie Hotel on G Street for many years, until that structure was demolished.

The mural team began their work in the evening on August 8 for projections. Actual paint time started August 10 and took a couple weeks and weekends to finish. Lodge member Steve Souza painted on a primer coat before the mural artists begin. After the mural is painted, solar lighting will be installed so that the mural can be visible at night.

“The Davis Odd Fellows have been a fixture in Davis since 1870, and have been located in the Lodge Hall on Second Street since 1955,” said long-time member Lodge member and President of the Hall Board Association Dave Rosenberg. “We are pleased to make this contribution of public art for the community and for visitors to Davis. Downtown Davis is becoming quite the art venue – and this mural, besides being the largest in the core, evokes a fun mixture of history and modern times – just like the Davis Odd Fellows Lodge.”

The Davis Odd Fellows Lodge was chartered in 1870 and has been in continuous operation since that time. The Davis Rebekah Lodge was chartered in 1901 and also has continuously operated in Davis since that date. Together, these two fraternal Lodges control the Hall Board Association which was formed and incorporated in 1955 and manages the property.