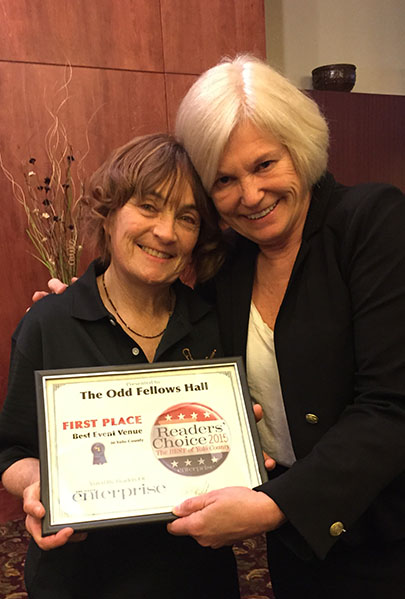 “We are delighted to receive this award and recognition,” said Hall Board Association President Dave Rosenberg. “We have opened our Lodge Hall to the community for meetings, dinners, lunches, breakfasts, receptions, book signings, dances, birthday parties, anniversaries, and events of all kinds. And the community clearly enjoys and appreciates our beautiful Lodge. Special thanks to Operations Manager Dody Black and her staff who were absolutely instrumental in this recognition.”

The Davis Enterprise hosted a large party and reception at the Odd Fellows Lodge Hall for all the first place recipients of the “Best of Yolo County.”

The Hall Board Association has spent several years in remodeling and upgrading the Lodge Hall, and in making it accessible. “It’s still a work in progress,” said Dave Rosenberg, “but we are delighted to be recognized as a focal point and gathering place for our community. This is what Odd Fellows Lodge Halls used to be in the 19th Century, and what we believe they can be again today in the 21st Century.”