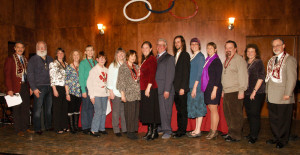 Davis Lodge #169 on January 17 held its annual Initiation and Awards Dinner at the Lodge. Over 80 attendees watched the installation of the five elected officers and the 13 appointed officers of the Lodge. Noble Grand Lea Rosenberg was installed for another term in office. Officiating at the Installation was Deputy Grand Master Dave Rosenberg and District Deputy Grand Master Dave Reed, both also Past Grands of the Lodge. Noble Grand Lea also presented 22 merit jewels to members who had made substantial contributions to the Lodge over the past year. In addition, she presented the Spirit Award to Financial Secretary Duff Devine, the Noble Grand’s Award to retiring Lodge Treasurer Penny Smith, and the Member of the Year Award to the Lodge Saturday morning breakfast crew of Vic Bucher, Rea Nakanishi, Steve Lopez and Amy Hodam.

Here is a photograph taken of most of the newly installed officers. Pictured left to right: