Classic films are back. 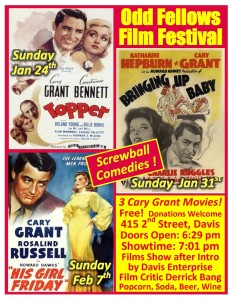 The chosen genre for this Classic Film Festival series is “Classic Screwball Comedies”. As noted by Dave Rosenberg, Chair of the Odd Fellows Classic Film Committee, “In the 1930’s and 1940’s, the American public went wild for screwball, wacky and zany comedies, and the three films we will show in this series are prime examples of the genre. We are especially pleased that all three films feature one of the great leading men of Hollywood – Cary Grant – who had many serious dramatic roles, but also really excelled as
a comedy actor. Prepare for some major funny-bone tickling.”

First in the series, screening on January 24, will be the 1937 classic Topper, starring Constance Bennett and Cary Grant, and featuring Roland Young. This film tells the story of a stuffy banker, Cosmo Topper, who is haunted by the ghosts of a fun-loving, married couple. George (Grant) and Marion (Bennett) are rich and irresponsible and
wind up wrecking their classy sports care, waking up from the accident as ghosts. They realize that they aren’t in heaven or hell because they have never been responsible enough to do good or bad deeds – so they decide to free their old friend Cosmo Topper (Young) from his boring lifestyle as their ticket to heaven. The rest of film is a crazy romp.

The second film will be shown on January 31, and features two of Hollywood’s biggest stars. The film, from 1938, is Bringing Up Baby, starring Katherine Hepburn and Cary Grant. It was directed by Howard Hawks and released by RKO Radio Pictures. The film tells the story of a paleontologist (Grant) in a number of predicaments involving a scatterbrained woman and a leopard named Baby. A series of really wacky events involving an intercostal clavicle bone for a Brontosaurus skeleton, a wedding, a dog, a confused cop, jail, and lots of misadventures follow.

Third and final film in the series is His Girl Friday, which will be shown on February 7. This 1940 film is considered by many critics to be the best screwball comedy of all time. It was also directed by Howard Hawks, and features Cary Grant as Walter Burns and Rosalind Russell as Hildy Johnson. This film is noted for its rapid-fire repartee, using overlapping dialogue to make conversations sound more realistic – one character speaking before the other character finishes. The film is full of ad libs and hilarious situational comedy.

All films are introduced by noted local film reviewer and movie critic Derrick Bang who will give the audience insight into the back story of each film, the actors and directors.