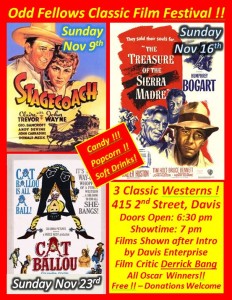 The first Odd Fellows Classic Film Festival last February proved so popular, the Odd Fellows will do it again.

The Odd Fellows Classic Film Festival will return on three successive Sundays this November.   On November 9, 16 and 23, the Davis Odd Fellows Lodge will host three classic examples of the cinema arts – this time featuring classic American Westerns.  The American Western is the unique invention and product of Hollywood, and the genre continues to be popular to this day.  The three classic films will be shown at the Davis Odd Fellows Lodge Hall, Lower Hall, on the Lodge’s big screen – doors will open at 6:30 p.m. and showtime is 7:00 p.m.

Well-known and respected Davis Enterprise film critic Derrick Bang will be on hand to introduce each film, and provide the back story that film aficionados appreciate.

The Classic Film Fest will kick off on November 9 with one of the all-time classic Westerns, Stagecoach.   This 1939 film was directed by the legendary John Ford.  It stars Claire Trevor, Andy Devine, John Carradine, and in his starring film debut – John Wayne.  That first panning close up of Wayne in this movie is iconic – once you see it, you won’t forget it.  This film follows a group of strangers on a stagecoach through Apache country, traveling to Lordsburg.    Viewers will witness plenty of character development and plenty of action in this film.

On November 16, the Classic Film Fest features The Treasure of the Sierra Madre.   This “neo-Western” and adventure film stars Humphrey Bogart in an unusual casting, moving into paranoia and insanity as the film progresses.  Released in 1948, the film was one of the first to be shot outside the United States, in Mexico “on location”.  The movie includes gold, greed, Banditos, Federales, and more.  And the film takes some twists and turns, some expected and some surprising.

The final screening, on November 23, will feature the quirky comedy-Western Cat Ballou.    Released in 1965, this classic film stars Jane Fonda in the title role, as well as Lee Marvin, who received an Oscar at the Academy Awards presentation for “Best Actor”.  The film includes gunfighters, ranchers, train robbers, outlaws, and Western justice.

The classic movies presented by the Davis Odd Fellows Lodge are a public service to support the history of cinema.  The public is cordially invited to these classic screenings.  Admission is free, but donations at the door to benefit community and charitable groups are gratefully accepted.   The Odd Fellows will also have popcorn, candy, soft drinks, wine and beer available for attendees at reasonable prices.