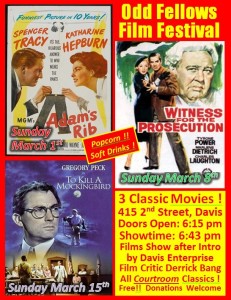 The Davis Odd Fellows Classic Film Festival is back by popular demand. Three classic films from the Golden Age of Hollywood will be screened at the Davis Odd Fellows Lodge Hall on three successive Sundays: March 1, 8 and 15. Doors open at 6:15 p.m. and showtime for each film is 6:43 p.m. The films are shown on a large screen in the Lower Hall of the Odd Fellows Lodge, located at 415 Second Street in Downtown Davis. The Classic Film Festival is open to the public at large, and there is no charge to attend. Wine and beer is available, as is popcorn. Although plenty of chairs are set up for film-goers, attendees are welcome to bring their own bean bags and comfy beach chairs if they wish.

“A year ago, the Davis Odd Fellows Lodge launched a Classic Film Festival that proved so popular, we brought it back in the Fall,” said Classic Film Committee Chair Dave Rosenberg. “And because there continues to be such a demand for great cinema in the community, the Odd Fellows are pleased to bring back Chapter Three in our recurring Film Festival. I think it has now become a permanent feature in this town.”

The three films to be featured in March are all classic courtroom cinema. All three films were chosen by Davis Enterprise movie reviewer and critic Derrick Bang and the Odd Fellows Classic Film Committee.

The featured film on Sunday, March 1, is “Adam’s Rib.” This 1949 classic stars Spencer Tracy and Katherine Hepburn as two lawyer, married to each other, who wind up opposing one another in court. It’s considered a romantic comedy by some. The film is notable for unusually long “takes” where the camera does not move for long periods of time. And of course, with Spencer Tracy and Katherine Hepburn in the lead roles, this film features two of the greatest stars of American cinema.

On March 8, the Film Festival will show “Witness for the Prosecution”, a suspenseful 1957 courtroom drama set in the Old Bailey in London. The film stars Charles Laughton, Tyrone Power, and Marlene Dietrich, and is full of unexpected twists and turns. The film is based on a short story by Agatha Christie. Many film critics view this as one of the best courtroom dramas of all time. This movie is a tour de force by Charles Laughton, and Tyrone Power and Marlene Dietrich play unusual roles in the film.

Finally, on March 15, the Film Festival wraps up with the ultimate classic courtroom film from 1962: “To Kill a Mockingbird” starring Gregory Peck in the iconic role of country lawyer Atticus Finch. An entire generation of law students watched this movie and wanted to become moral, courageous and honest lawyers like Atticus Finch. This story is set in the South and deals with issues of race, equality and injustice. The movie is based on the one and only novel written by Harper Lee – although Lee is scheduled to release her second novel this July.

Prior to the screening of each film, well-known Davis Enterprise film critic Derrick Bang will say a few words about the movie, and will give some insight and back-story to the stars and the making of the film.