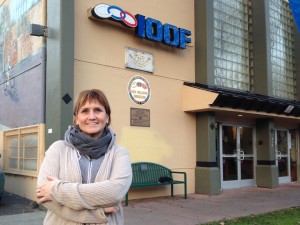 An ancient admonition of Odd Fellowship is to “educate the orphan”. Davis Odd Fellows Charities, Inc. was established to provide financial help to orphans and children who grew up in the foster care system, and wish to pursue their academic goals. Scholarships of up to $10,000 per year are available to qualified applicants who are recommended by an Odd Fellow or Rebekah Lodge member. The funding for this program comes from the family of Triffle P. and Annie G. Ivancovich. Triffle Ivancovich was a long-time Odd Fellow and Annie Ivancovich was a long-time Rebekah – both cared deeply about helping children in need, and both believed strongly in the admonition to “educate the orphan.”

“We are proud to announce the next recipient of a $10,000 scholarship,” said Davis Odd Fellows Charities, Inc., President Dave Rosenberg. “Holly Jan Pierce presented a compelling story of perseverance over adversity, and strong desire to use her education to help others. She has strong academic credentials, maintaining a 3.66 GPA. We will support her academic goals to achieve a Masters of Social Work (MSW) degree.”

Holly’s story in her own words:

“The first 11 years of my life were wonderful. I had very attentive parents who were able to express their love, affection, and joy for being my parents. At 12 years old my father started having extramarital affairs and that devastated my mother. My father left us and mother was lost emotionally, physically, and spiritually. Her entire identity was based on being a wife and mother. That was all she knew. When dad left, she sought lower companionship. There were strange men in and out of our house at weird hours of the night. I could never really figure out what was going on; I just knew something wasn’t right. On Christmas Eve there there 3 gifts under the Christmas tree. I could tell that they were brand new bed pillows; one for each of us children. As I turned towards the living room, I saw my mother going into convulsions on the couch. She was surrounded by people who seem to straggle in and out of our home. I heard one of the guys say, ‘Is she gonna die, I;ve never dealt with a heroin addict before?’ I didn’t understand the depths of what I was hearing, but I knew our lives were going to change. I felt myself enter into a dark corridor; everything I have ever known or believed in didn’t seem to matter at this point. I ran away that night. The next morning I came home prepared to face whatever life had dealt the night before. My mother was feeling better and the gifts under the tree were gone. A couple weeks later dad came back. I thought everything would go back to normal because dad was home to stay.

“Mom and dad were able to find a common ground and something to keep them together; they had found heroin, and together the 2 of them left us kids. I knew that children shouldn’t be left like this, but I had nowhere to turn. There was no one to ask for help. I called the Child Protection Services and asked if they could help me and my younger siblings stay together. They came and picked us up in police cars. It was terrifying, but at least we had each other. Once we arrived at the Children’s Receiving Home we were separated. Although we remain in close contact and see each other frequently, we have never lived together in the same house.

My parents were never able to do the things that were required for compliance and reunification according to the courts. Since then I have had 2 more little sisters, both were born addicted to heroin and promptly removed from my mother’s care. Our brother has died, as well as our mom. I make it a point to get together with my 3 younger sisters as often as possible. This last Thanksgiving was the first time that we have been able to come together as adults and cook together our first annual Thanksgiving.”

Holly graduates this year from the University of California with honors and a degree in sociology. She is pursuing an MSW and says that she is “deeply passionate about advocating for those without a voice.” Her career goal is to work for the Department of Social Services and help develop programs that serve the most at-risk populations.