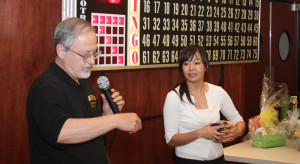 The Davis Lodge #169 Bingo Committee is entering its 8th year hosting live Bingo for the community. The Lodge Bingo Committee presents Bingo every month on the second Sunday, doors opening at 12 noon and Bingo beginning at 1 p.m., usually running till 4 p.m. Typically 60-90 members of the public travel to the Davis Lodge Hall to play Bingo. Winners of each game receive cash, up to $250 in the final “blackout” Bingo game.

Davis Bingo was the idea of long-time Lodge member Dave Rosenberg, who implemented it when he served as Noble Grand. Over the past seven years, it is estimated that Davis Bingo has contributed well over $50,000 to the community, plus afforded community members many hours of bingo fun. Davis Bingo has also developed a loyal following of players.

In addition to Bingo, the committee presents free door prizes to the players, instant win pull-tab games are available, and the committee runs a snack bar for participants.

Bingo at the Davis Lodge was approved, pursuant to the California statutory framework, by the Davis City Council. The Davis Lodge is the only entity in Davis permitted by law to operate real bingo with cash prizes.