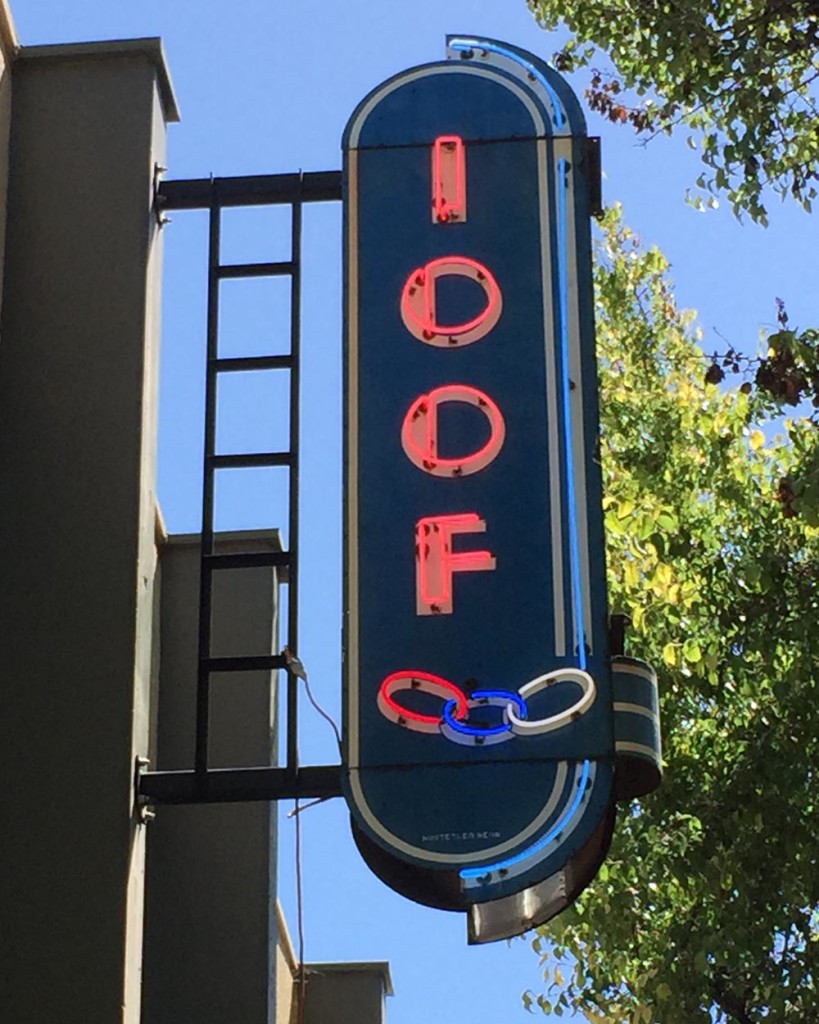 It was the year that the Metropolitan Museum of Art was formed in New York, the United States Department of Justice was created, Lewis Carroll published “Through the Looking Glass”, the Franco-Prussian War was started, Bulgaria and Romania declared their independence from the Ottoman Empire, Otto von Bismarck was Chancellor of Germany, Alexander Graham Bell developed his prototype telephone, the Anglo-Zulu War was waged, Ulysses S. Grant was President of the United States, and the Davis Odd Fellows Lodge was chartered.

It was just five years after the end of the Civil War, and in that year a number of leading citizens banded together to form an Odd Fellows Lodge in the Davisville area. UC Davis wouldn’t be founded for another 35 years (1905), and the City of Davisville (later, Davis) wouldn’t be chartered for another 47 years (1917). In the 1870’s, Odd Fellows Lodges were popping up all over the small towns and villages of California, in particular Northern California, spurred initially by the Gold Rush. When the Davis Lodge was chartered, it received the lodge number 169, as it was the 169th Lodge chartered by the Grand Lodge of California in the 21 years since California Lodge #1 was chartered in 1849. Originally, the Davis Lodge was known as the “Yolo Lodge” because it preceded the establishment of the City of Davis. Subsequently, in 2006 the Lodge renamed itself “Davis Lodge”, but retained the historical number 169.

The actual date of the original Lodge charter was April 12, 1870, and on April 12, 2016, Davis Lodge #169 celebrates its 146th birthday. In recognition of this 146th birthday as the oldest continuously operating organization within the Davis City limits, the Davis Odd Fellows Lodge is hosting an Open House on Tuesday, April 12, at the Davis Odd Fellows Lodge Hall, 415 Second Street in Downtown Davis. The Lodge will be open to the community from 4:30 to 6:30 p.m. and the public is cordially invited to attend the festivities. There will be music by David Hafter, refreshments, and tours of the historic Odd Fellows Hall led by Docents. This is an opportunity for members of the public to see the historic hall and to learn the back-story of the Odd Fellows.

During the years 2006-12, the Davis Odd Fellows Hall underwent a major remodeling project, costing almost $1 million. The project restored the Lodge Hall, inside and out. An elevator was installed, the kitchen became a modern commercial kitchen, new bathrooms were installed, new carpets, wood paneling, new ceilings, painting inside and out were parts of the project. The Lodge has one of the largest murals in Davis on its west wall, depicting scenes from Davis life. An office was created at the Lodge to house the Operations Manager and staff. The Lodge has a high-tech projection and sound system. A multicolored neon Odd Fellows sign was recently transported from back East and was affixed to the front of the Lodge.

“The Davis Odd Fellows Lodge has become a central venue not only for the Lodge members, but for many community groups,” said long-time Odd Fellow Dave Rosenberg. “It’s fair to say that we have become one of the premier organizations in Davis.” Rosenberg went on to say that the Lodge, in the last 10 years, has grown from under 20 members, to its current membership of over 250, ranging in age from 17 to 87. “The Davis Lodge is now one of the three largest Lodges in California and the United States. But more importantly, it is an extremely active Lodge with over 50 committees planning fun activities for the members and making significant contributions to the community.”

The Davis Lodge is host to various community groups that meet at the Lodge, including the Rotary, the Soroptimists, the Inns of Court, and many others. The Davis Lodge is also the sponsor of many community events that take place at the Lodge Hall including A Taste of Davis, Breakfast with the Bunny, Breakfast with Santa, the Classic Film Festival, and the Picnic Day Pancake Breakfast. The Lodge hosts monthly Bingo for the community, contributing all net proceeds to charitable and community groups. The Lodge also hosts Thursday Live! music for the community, with no admission charge. The Odd Fellows are now planning a Davis Chocolate Festival for the Fall.

Information about the Davis Odd Fellows Lodge and events at the Lodge can be found at https://www.davislodge.org.

The Davis Odd Fellows Lodge is non-political, non-sectarian and open to men and women. The Lodge is almost equally divided between men and women. Current Noble Grand of the Lodge is Jean-Paul Montreuil, Vice Grand is Stewart Savage, Secretary is Jim Smith, Treasurer is Janis Rosenberg, and Financial Secretary is Duff Devine. The Odd Fellows fraternal order originated in England in the 1700’s and came to the United States in 1819, and California in 1849. The symbol of the organization is the interlocking three links, representing Friendship, Love, and Truth.