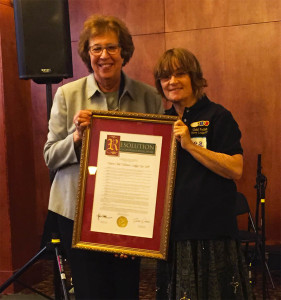 State Senator Lois Wolk presented a Joint Resolution from the California Legislature commemorating the Davis Odd Fellows Lodge #169 on the 145th Anniversary of its charter. Receiving the resolution is Lea Rosenberg, Noble Grand of the Davis Lodge. The 145th birthday party and open house was held on April 13, 2015.

The Lodge held an open house for the community, complete with cake, appetizers, beer and wine, and over 100 members of the community attended. A history of Odd Fellowship and the Davis Lodge was presented by Past Grand and Hall Board President Dave Rosenberg, and members of the Lodge gave tours of the remodeled Lodge to members of the public. Also in attendance was Past Grand Dave Reed.

Also in attendance at the event were several family members and descendants of the very first Noble Grand of the Lodge, Jacob Horning. The descendants of Mr. Horning still live in Yolo County and are prominent residents, mainly engaged in agriculture.

The Davis Lodge is an energetic and active Lodge, having grown in the last decade from 23 members to 230 members (with 28 pending applications to join). The Lodge hosts 33 committees that organize fun events for Lodge members, and that also are active in the community doing good works.