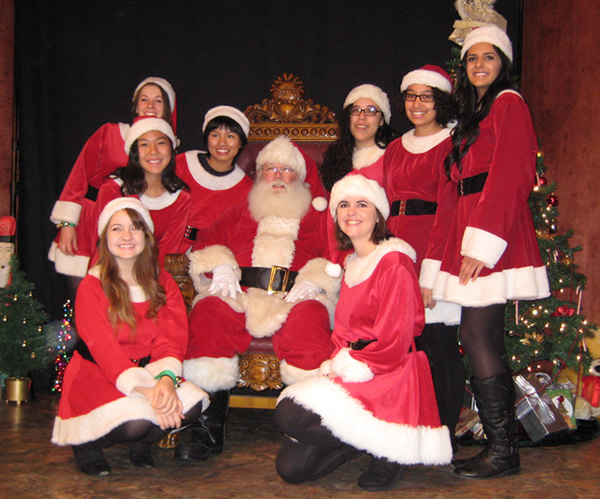 We have so many people to thank, but especially the world’s best Santa, our own Doug Hatton. Thank you also to his wife and Santa Manager Margee, and the 8 young ladies who were the elves. The kitchen and cooking crew headed by John Geisler and Barb Geisler were just great – hard-working from 6 a.m. and constantly cranking out the pancakes, sausages and other goodies. Thank you to our excellent photographer, Ernesto Sandoval, and Dee Clark from Woodstock’s who served her famous Cinna-Bread. We had some 50 volunteers from our Lodges who worked in shifts from 7 this morning till about 1 p.m. this afternoon. Thank you to Sharla Cheney who, once again, was our volunteer coordinator, and Dave Rosenberg, once again our volunteer wrangler and PR guy. Everyone pitched in filling goodie bags, decorating the tables, serving, cleaning, and doing all the tasks that need to be done to pull off this event. This year we tried something different and had three volunteer shifts, rather than two – thus involving even more members of our Lodges. We also had a special clean-up crew of volunteers to handle the kitchen. It takes MANY hands to put on this big show. Thank you, thank you, thank you to all the volunteers:

And, once again, we received applications from folks who attended Breakfast with Santa, and now want to join the Odd Fellows and Rebekah Lodges. They want to join because they see the great community spirit of our Lodges and members.

We also appreciate the merchants, like the Davis Coop, Woodstock’s Pizza, Mezzeta Foods and Puroast Coffee, who donated all the food supplies. And thank you to the many donors who contributed over $3,000 to help our efforts – donors like Edward Jones Inc. and David Cougevan, the Yocha Dehe Wintun Nation, the Wochok Group, the Law Offices of Raquel Silva, the Law Offices of Roberta Savage, Supervisor Don Saylor, Retired Supervisor Helen Thomson, Davis Ace Hardware, Davis Waste Removal, First Northern Bank, Tandem Properties, Hanlees Nissan of Davis, and others. We also thank Avid Reader and Common Grounds who have sold tickets for us for many years.

The proceeds from Breakfast with Santa are used to benefit foster children in our community, and young adults who have recently left the foster system.

We look forward to the eighth annual Breakfast with Santa in 2013. (Once we rest up.)