Breakfast with the Bunny

The Davis Odd Fellows Lodge sponsored a very successful Breakfast with the Bunny this morning in downtown Davis. This was our third annual Breakfast with the Bunny, following successful events in 2012 and 2013! Over 150 children and their parents/grandparents/guardians attended the event.  I heard only favorable comments about the event and about the Davis Odd Fellows Lodge.

The attendees enjoyed a Continental breakfast, followed by a short walk to a park for a real egg hunt, and concluding with the “Eggstravaganza” featuring a carnival, arts and crafts tables, face painting and caricatures.

Barb Geisler and I co-chaired this event and we had some GREAT volunteers. Zita Demaree ran the very popular carnival and Margie and Mike Cabral (and their daughter) headed up the egg hunt. Both the carnival and the egg hunt were new features this year – so thank you Zita, Margie and Mike. Thank you also to hard-working volunteers: JuDee Archuleta, Joyce Trujillo, Dave Rosenberg, Jessica Sneeden, Joel Mandel, Findlay McIntosh, and Jeff Oblinger. Also, thanks to Jeannie Pytel and her son, Eric, who was “the Bunny” for the second year in a row. Zita also arranged for a couple dozen sorority and fraternity kids who came to the Lodge to help out in all aspects. NG Bob Schelen came by for moral support.

Special thanks to the Davis Food Co-op which, once again, donated the food for the breakfast, PurRoast coffee which donated the coffee, Nugget Markets which donated the sugar cookies for the cookie decorating table, Debbie Davis and the Davis Enterprise for all their stories about the event, Davis Community Church for donating a park on their property for the egg hunt, and Avid Reader Active and Common Grounds which sold tickets for us.

The event brought in over $1,500 to the Lodge which will help us in our good works in the community.

Three attendees asked Dave for application forms and are considering applying for membership in the Lodge. 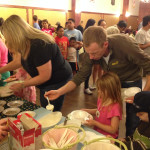 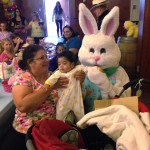 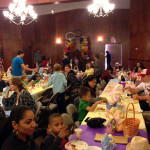