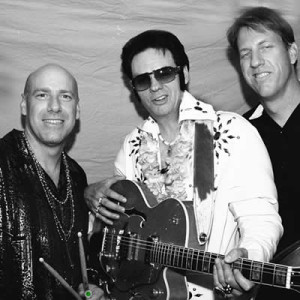 The December 5th Thursday Live! show will kick off the holiday season with festive songs and treats. The show is free but donations are graciously accepted. All donations from this special show will go to the Davis Odd Fellows Encampment who raise money throughout the year to send children to summer camp.

We will have seven local musical groups for this show. Each act will play a few holiday or seasonal themed songs styled in their own unique way. Odd Fellow member Juelie Roggli says, “We are very excited to announce that Santa will join the show to delight kids of all ages”.

Cold Shot has been performing on the local music scene for years. Richard Urbino (bass, support instruments, vocals), and René Martucci (guitar, accordion, vocals) include iconic covers and catchy original tunes in an energetic show that invites audiences to have fun! Cold shot will be performing two special holiday songs and one original number for Thursday Live!

Elvis and the E-Men feature Dave Cowden on drums, Ron Cowden on upright bass and Tom Moore performing as Elvis. Elvis has come back “From the Great Beyond” to entertain you and it will be fantastic!

Biscuits and Honey is Dianna Craig on guitar, Ron Cowden on upright bass and Kurt Roggli on guitar. This trio sings a blend of bluegrass and folk holiday songs.

Calvin Handy and The Jazz Patrol will have the audience swaying to some holiday standards.

Me & Him, the instrumental acoustic guitar duo of Martin Lewis and Kurt Roggli, will put a new twist on the old tunes.

David Campos and friends play traditional and contemporary Latin American tunes with a holiday theme. It might be cool outside but the rhythm will be hot!

This series of concerts is supported by: The Davis Odd Fellows Music and Concert Committee and KDRT.

Spread the word! We can’t do this without YOU! See you on the 5th.