Tickets go on sale starting Thursday, March 24, for the Seventh Annual “A Taste of Davis”. This event features over 20 Yolo County restaurants, caterers, wineries, breweries, dessert and coffee houses, all under one roof. Guests are free to sample any and all of the food and drink from these purveyors for one low admission price. Tickets are available to the general public at $20 per person and can be obtained from two local vendors: Avid Reader Active in Downtown Davis or Common Grounds in South Davis. Tickets will also be available for purchase on-line starting at 12 noon on March 24 at www.tasteofdavis.eventbrite.com. 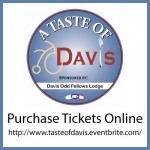 Major sponsor for the 2016 Taste of Davis is Pacific Gas & Electric Co. Super sponsors supporting the event are the Davis Enterprise, Davis Downtown (formerly know as DDBA), and A Grand Affair.

Long-time Co-Chair of the event, Lea Rosenberg, said: “This is a fun and popular event in Davis. Folks love to sample the variety of foods, wines and beers, but it’s also one of the great social events of the season. Folks enjoy the opportunity to chat with friends and neighbors, and to see and be seen.”

Every year the Davis Odd Fellows designate a beneficiary for some of the proceeds of this event. The Elderly Nutrition Program will be the beneficiary this year.