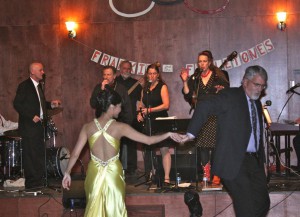 Over 80 Odd Fellows and Rebekahs from throughout California attended the First Annual Grand Ball held at the Davis Lodge on February 10. Guests enjoyed socializing and appetizers in the Lower Hall with mellow music played by balladeer David Hafter. In the Upper Hall, guests were entertained by Frankie and the Fabletones, playing music from the 50’s, 60’s and 70’s. Bars in both Lower and Upper Halls did a brisk business. The Grand Ball was the idea of Grand Master Rod Metoyer, who welcomed guests from the stage. And as a special treat, Dave Rosenberg, played the cow bell during one number (because you can never get enough cow bell).

Plans are already underway for the Second Annual Grand Ball.