After years of touring with her band Sarah & The Tall Boys, Sarah Potenza was chosen over 50,000 candidates to appear on t.v. series, The Voice. Judge Pharrell Williams’ reaction to Potenza’s on-air audition gives you a pretty good idea of the level of talent of this incredible singer. Williams’ immediately exclaimed, “You’re giving this generation something they’ve never seen before.” Potenza left the show as a top 20 finalist then headed to Nashville, where she quickly integrated into the local music scene, becoming a staple at the world-renowned Bluebird Café and the globally broadcast Music City Roots program. She continues to earn raves for her big voice, which seamlessly blends roots, rock and soul.NPR Music exclusively premiered the music video to Potenza’s debut album, ‘Monster’. Programmers have been supporting her gritty sound and unstoppable resolve, resulting in ‘Monster’ moving quickly up the Americana Radio chart.

NPR Music calls the album a “blistering, riff-propelled personal anthem,” while No Depression states, “You won’t find any gimmicks on MONSTER, just pure unadulterated rock and roll.” Sarah’s album also received rave reviews from Rolling Stone. In September 2016, the magazinenamed her one of the top 10 artists you need to know, stating “Potenza is to the Blues what Adele is to Pop.”

The Odd Fellows Hall is located at 415 2nd St. in downtown Davis. Doors open at 7p.m.; show starts at 7:30p.m. Ticketswill be available at the door for $20. There will be a no-host bar. For more information contact Juelie Roggli: juelrog@gmail.com. 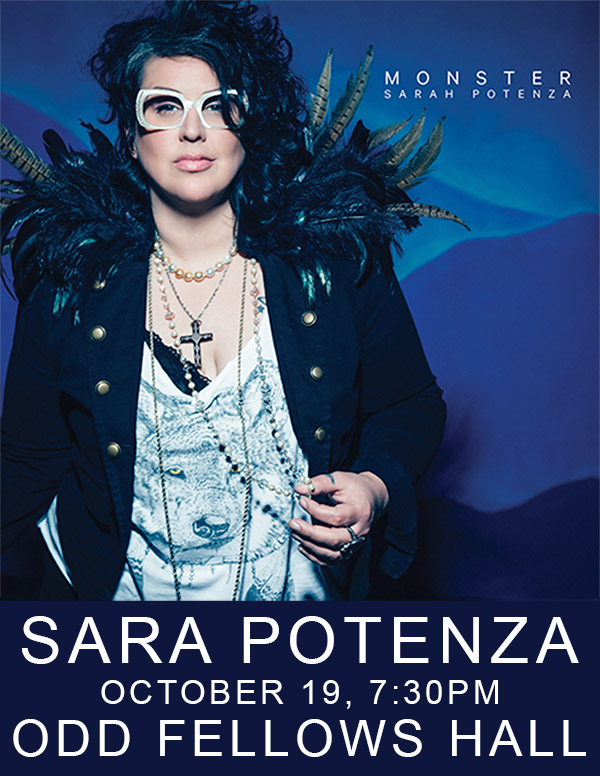