From Odd Fellows Bingo held on October 12, open to the general public. We had over 80 attendees to benefit Soroptimist International of Davis, a club which supports and assists women and girls. Bingo raised close to $900 for the Soroptimists. 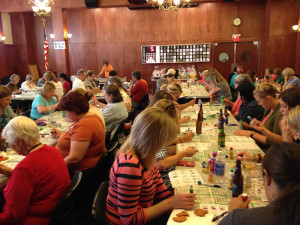 So far this year, the Davis Odd Fellows Bingo Committee has raised over $7,000 for local charitable and community groups. Bingo is called at the Lodge’s Lower Hall. The Davis Odd Fellows have operated Bingo for the community for over seven years and have raised over $50,000 for charitable and community groups in that time. In addition, there are many loyal Bingo players in Yolo County who look forward to monthly Bingo at the Lodge.

Chairs of the Bingo Committee for 2014 are Salie Yin and Eric Davis. Chairs for 2015 are Jean-Paul Montreuil and Jeff Oblinger.